Continuing the Quilters' Guild exhibits that were on display at Exeter Sewing Machine Shop, these next examples are all twentieth century and came with detailed historical information from the guild.  The first can be attributed to a maker, Elizabeth Ward  Originally from a farm owning family in Lincolnshire, Elizabeth worked in a Leicestershire dairy as a young girl and had her own family in the 1920s when she also started this patchwork.  She married against her family's will and they cut her off, reconciling after she had children.  The patchwork was kept by her granddaughter after Elizabeth died in 1961.  It's English paper-pieced and the stitching is in white thread throughout with small neat stitches. 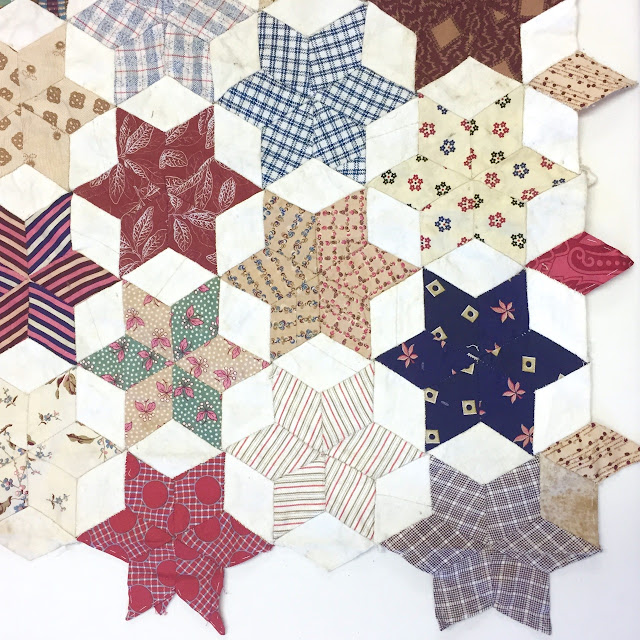 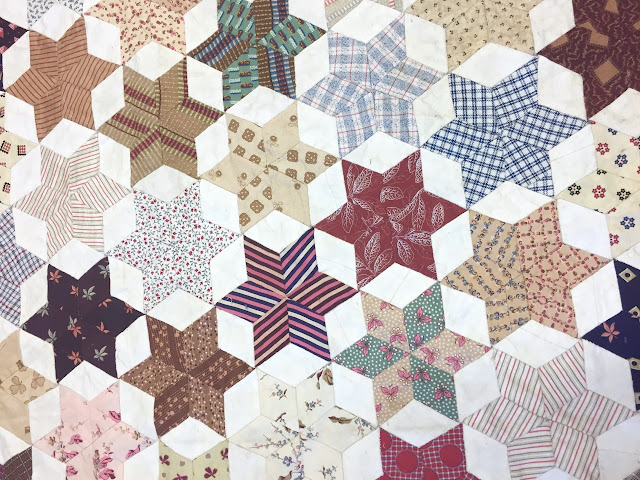 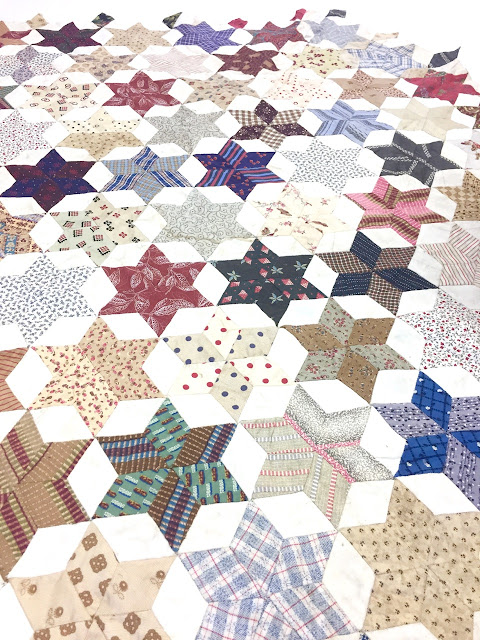 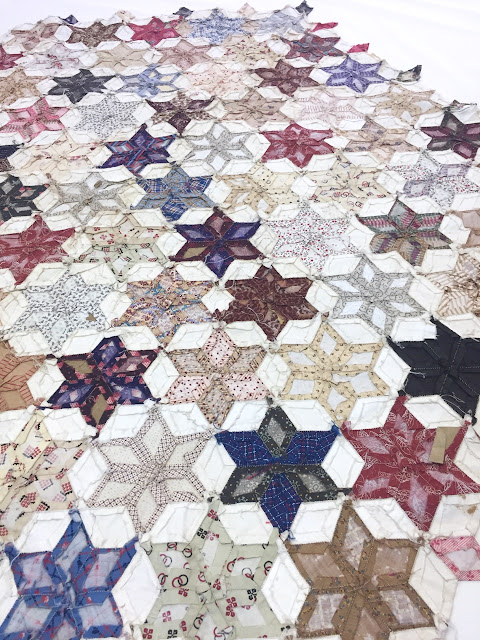 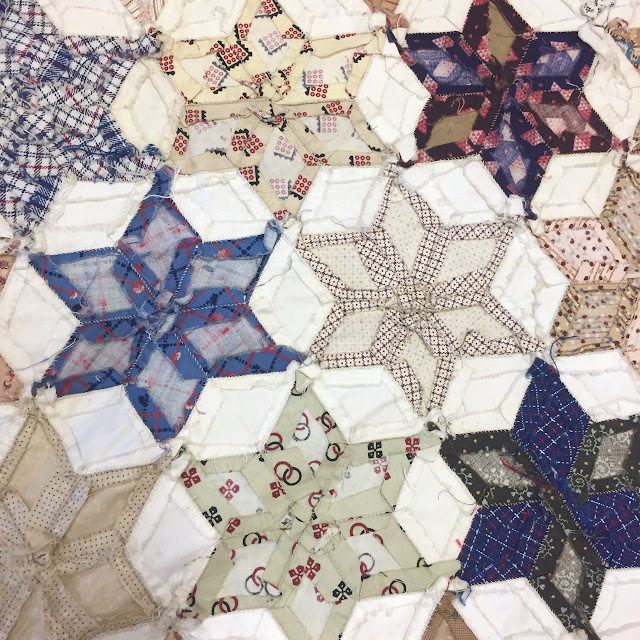 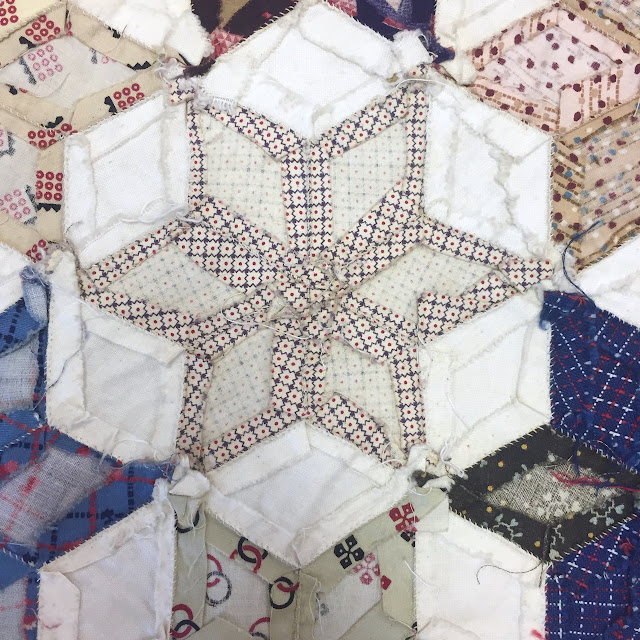 I loved the next example.  It was bright and modern with some of my favourite colours- shell pink, browns, cobalt blues and mint greens!  It's called the Medallion Log Cabin Coverlet and dates from the1930s. Made by Alice Stagg, who had a tailoring business, Fone & Stagg, in  Crewkerne, Yeovil Somerset.  It was known as the 'Polish Quilt' in her family and the guild suggests this could refer to it being made close to the outbreak of World War II in 1939.  A picture of her tailoring business can be seen on this page, it's on the right in the black/white photo of how Market Street used to look. 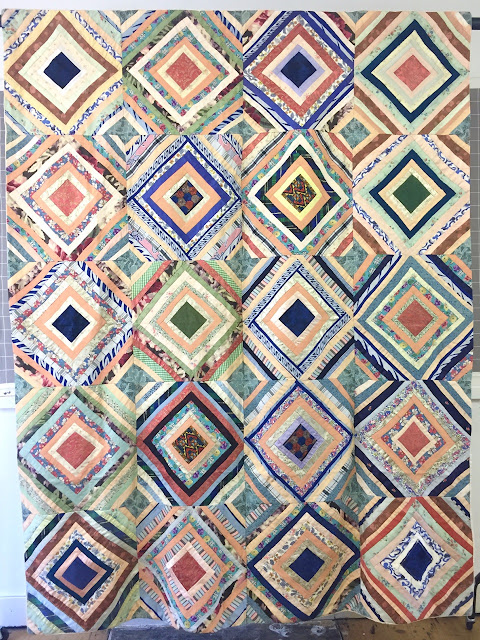 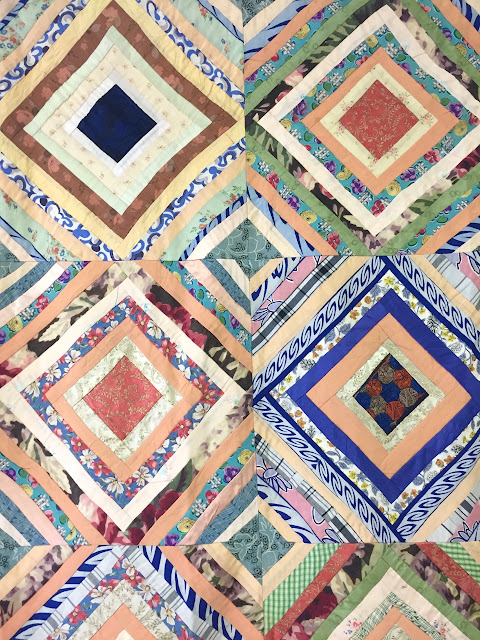 The fabrics are thought to be dressmaking scraps and you can clearly see the textures- crepes in particular.  They made me think of bias cut 1930s dresses. There are also lightweight brocades with metallic threads, satins, velvets embroidered fabrics and lots of dress suitable prints.  There are lots of different fibres too, silks, viscose and rayons along with cotton.  It's not quilted so there's movement and drape in the fabrics and the blocks are less rigid than a usual log cabin.  They reminded me of string quilts with all the mismatched lines and geometric pattern, as well as God's eyes.   Probably my favourite from all the exhibits!  I love the idea of repeating this today with Liberty lawn, chambrays and other dressmaking remnants. 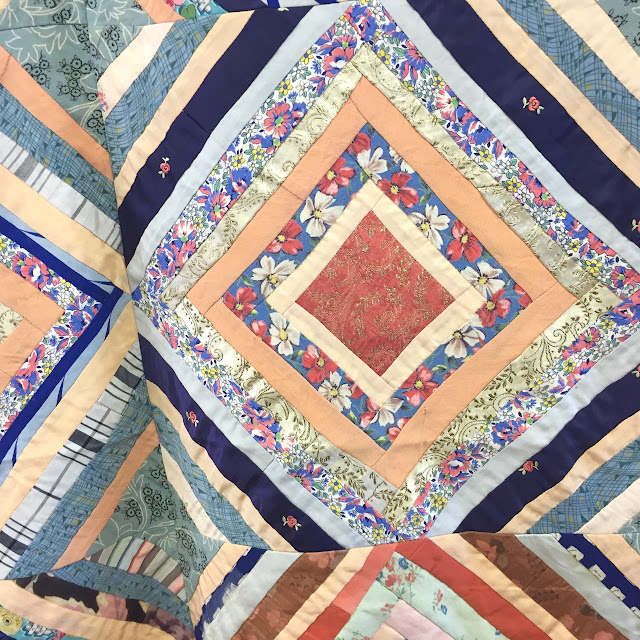 There were a few wholecloth quilts in the travelling collection and this caught my eye because the colour and the fabrics relate to Alice's coverlet above.  It's rayon, double-sided with a thin layer (maybe flannel) in between.  The edges are the fabric selvedges (it was around 90cm wide) and the top and bottom were whipstitched together.  The quilting was phenomenal, so neat and regular with quite a dense quilting design.  Dates from the 1930s.  You can see a selection of wholecloth quilts on The Quilter's Guild website. 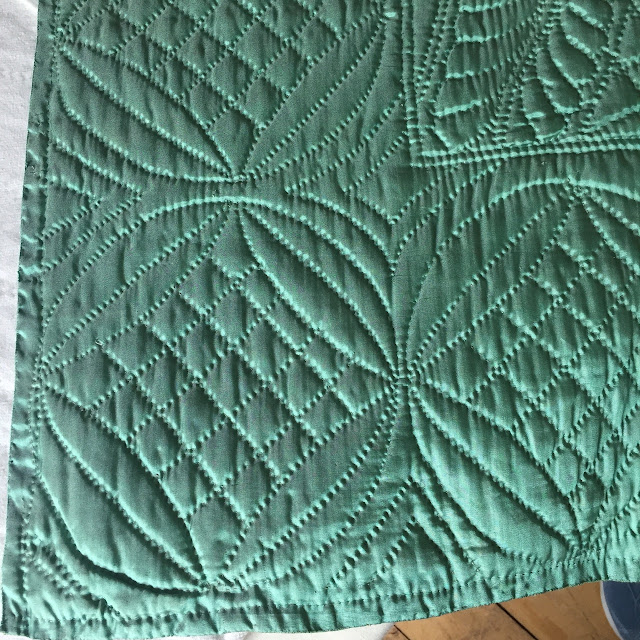 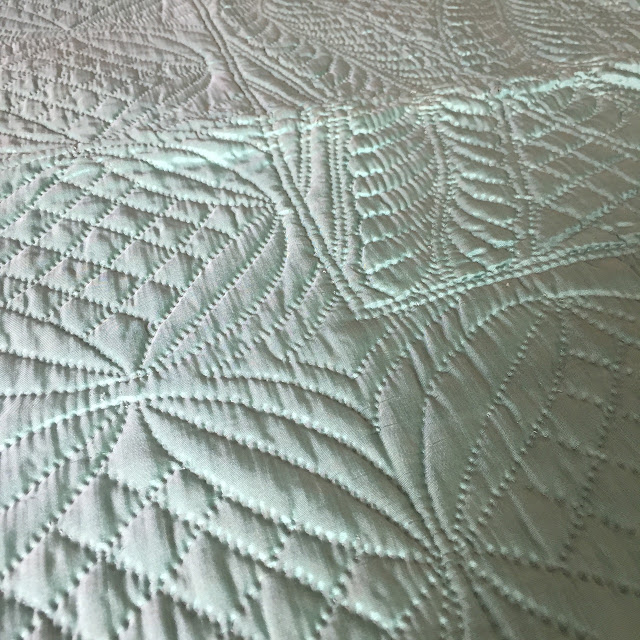 This quilt had a lot of resonance for the current charity activities in quilting following the Manchester bombing and the Grenfell Tower fire disaster. This is quilt is from the Canadian Red Cross Society  sent to the UK  duirng World War II - the label is in the top right-hand corner. 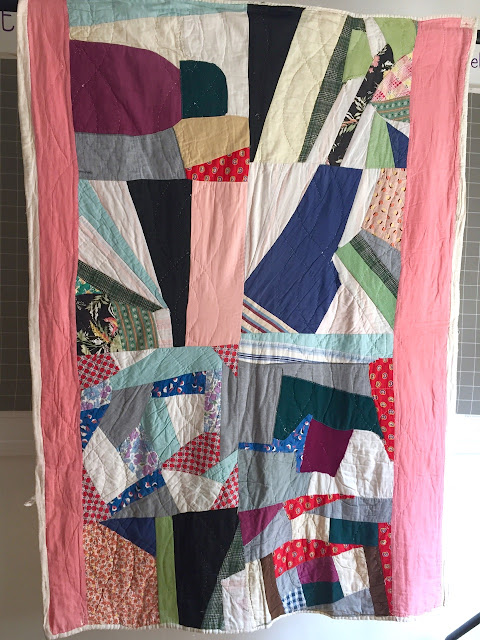 The piecing is fast, there are applique elements and visible selvedges as well as lots of improv style shapes and patterns, a quilt made for speedy dispatch.   You can read in more detail about quilting in World War II, and in particular about charity quilts from allied countries like Canada here. Quilts like this were sent for evacuated and homeless families, the domestic victims of war. 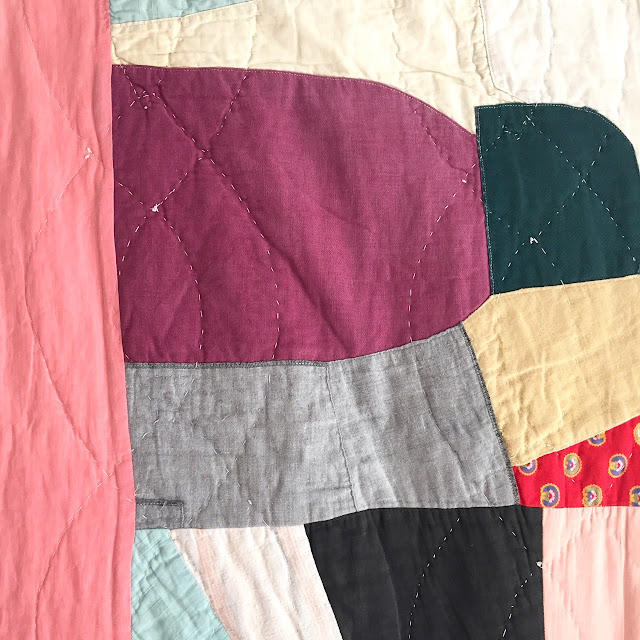 A big thankyou to Jenna and the rest of the team at Exeter Sewing Machine Company.  The Quilters' Guild touring exhibitions are a delight and I always learn so much!
at 11:56