I'm bringing my embroidery out from hibernation now that the light is brighter so, for this month's visit to sponsor Plush Addict, I picked out some embroidery related items in their new arrivals as well as threads and fabric.  There's also a 20% discount storewide discount for orders up to and including 29th April.  Find the code here! 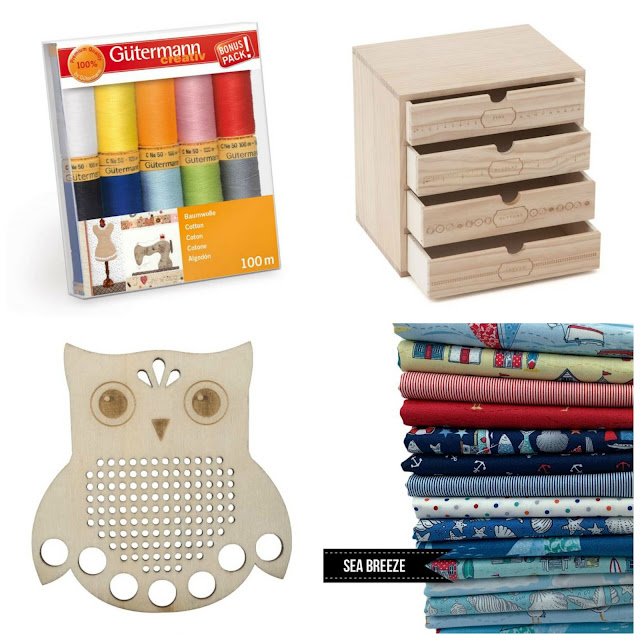 Sew Over It Eve Dress Review

I'm all about the wrap fastening this year.  I've always liked a wrap dress or skirt and my middle age low tolerance for tightness or restriction is encouraging me to sew lots of wrap garments.  I bought the Sew Over It Eve dress pattern at the end of last summer and looking around clothing on the high street there are still wrap dresses and jumpsuits everywhere so it's a trend that's carried over from last summer.  This pattern does take quite a lot of fabric.  I found this rayon floral on eBay for a ridiculously cheap price,  still available at the moment.  It's very drapey, slightly shiny and was much easier to press and sew than I thought it would be! 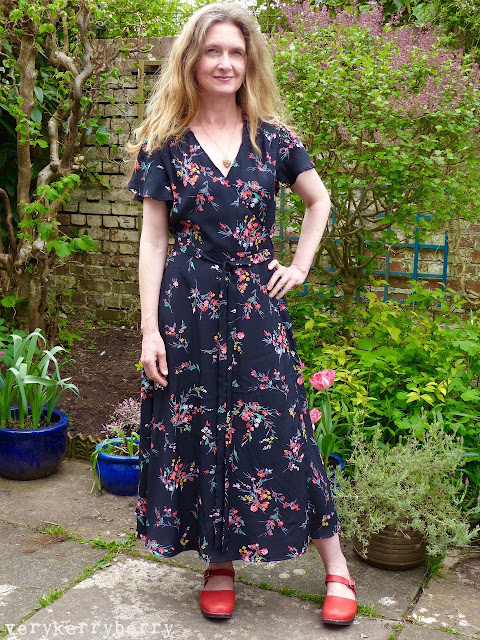 I made version 1 but lengthened the hem so it was the longest length at the back all the way around.  I traced the pattern and made a quick toile for the bodice and then ended up removing a little of the fullness at the gathers below the front shoulder- taking out 1/2" each on each side.  I graded a UK size 8 top to size 10 at the waist and a size 10 skirt as that matches my bust and waist measurements and 3 metres of fabric are ample, although I didn't need to allow extra fabric for pattern placement of matching. 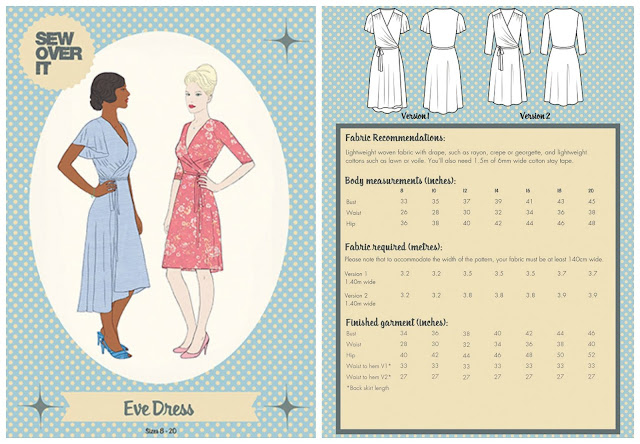 It's an easy and relatively quick sew.  The sleeves fit the armscye perfectly and the butterfly sleeve is soft and flattering to wear.  A longer sleeve would be good too... 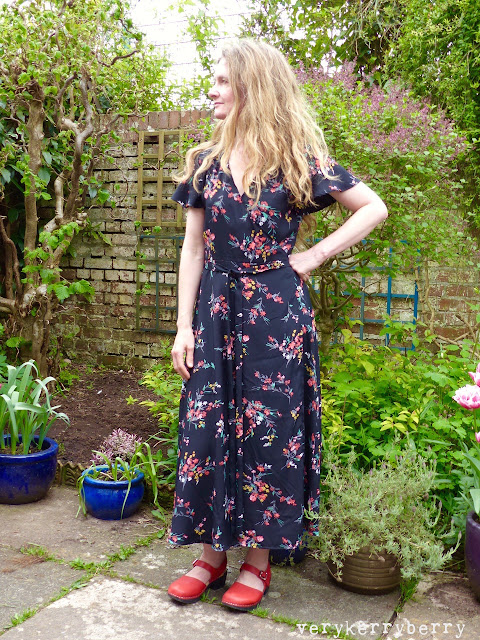 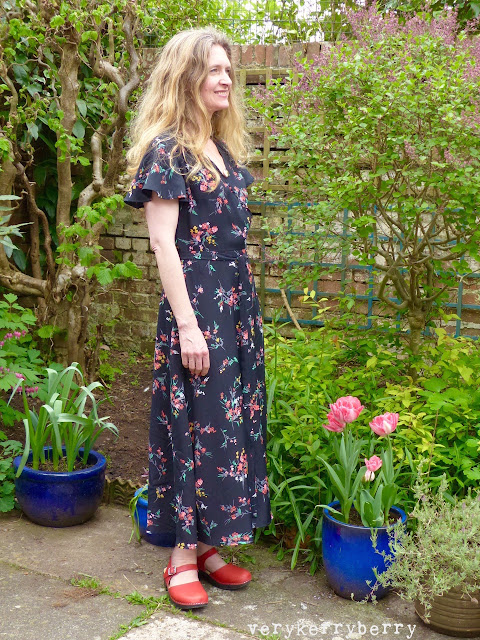 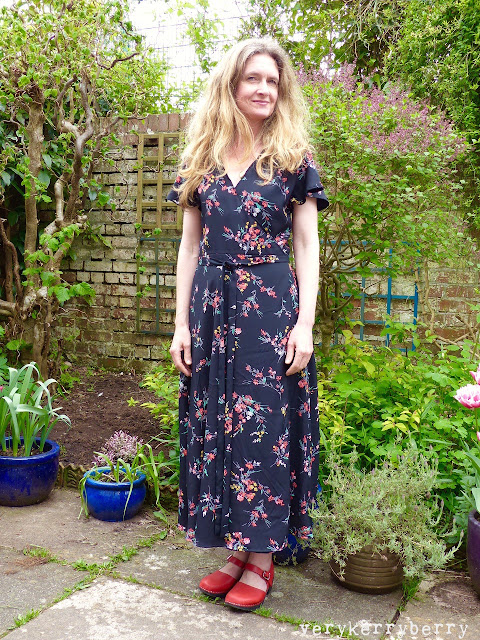 As I had extended the hem on the back and front skirt pieces I left the dress unhemmed for a few days so the bias on the side seams could drop and I could even out the length.  I waited until my daughter came home from Uni so she could measure up from the floor and pin an even line but I did find this handy post on the Colette blog on how to measure a skirt hem solo style.  The comments include some brilliant ideas about string and chalk.  My only departure from the instructions was with the belt.  Firstly, I sewed a long length of narrow tape into the short ends so it ran the inner length of the belt as I sewed the long seam, and then I used this to turn the tube through.  I snipped the tape close the short seam once done and removed the end fibres with tweezers. 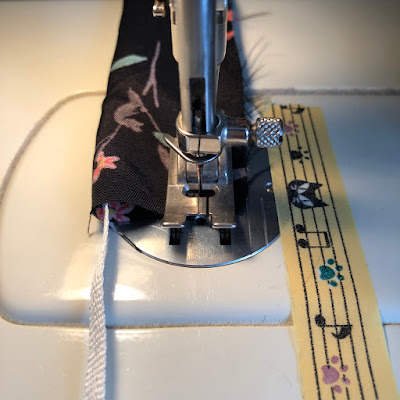 I also attached the belt slightly differently.  Rather than folding the raw edge over and pressing, I wanted the raw edge would be encased so before the wrap edge was folded over to the inside I sewed it into position as in the photo below.  When the wrap edge is pressed in, the belt then turns in too.  I then fol it outwards and secured with a few stitches on the outside edge. 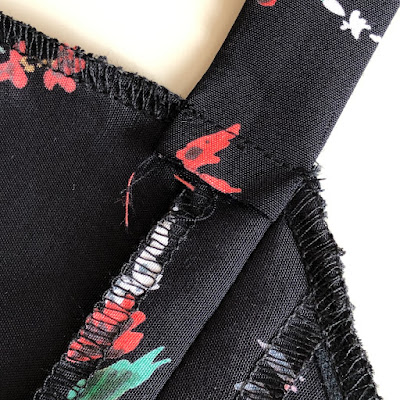 It's a great dress to wear!  Dressy enough to feel like I've made an effort for going out and so comfortable that I could happily wear it all day.   The skirt is swishy and the front overlap is generous, no fear of revealing too much on a windy day!  I've some more viscose in my stash and it's definitely a dress that needs drape so maybe another with longer sleeves?  There are so many Eve dresses to look at online made in a range of lengths and sizes, check out the Sew Over it Pinterest gallery for inspiration or #soievedress on Instagram for a bigger selection.
at 02:00 1 comment:

Email ThisBlogThis!Share to TwitterShare to FacebookShare to Pinterest
Labels: Eve, Eve Dress, sew over it, Soieve

Simple Folk Block of the Month Catch up

It's been a while since I blogged about my Sarah Fielke Simple Folk quilt.  It was one of her 2018 BOM and I was making good progress until around July when a mix of family commitments and a long work project took me away from regular sewing and it's taken a while for me to get going with it again.  I do sew sections of the quilt at the South West Modern Quilt Guild monthly meetings and I've just finished machine sewing border backgrounds which is dull but necessary canvas prep for the applique designs.  The bird is my final central picture block and is in part progress.  Choosing and prepping the fabrics for these blocks takes a long time and sometimes my choices change part way through if the colour or print isn't working; even the fabric texture can impact on the block.  In the bird block below, the legs were appliqued from some Japanese cotton lawn- anything thicker would've added to much bulk and frayed.  They are each about 1/8" in width. The tail fabric is a Denyse Schmidt print and is coarser than many of the other quilting cottons.  It was tricky to work with but I think I got away with it, despite the thick points. 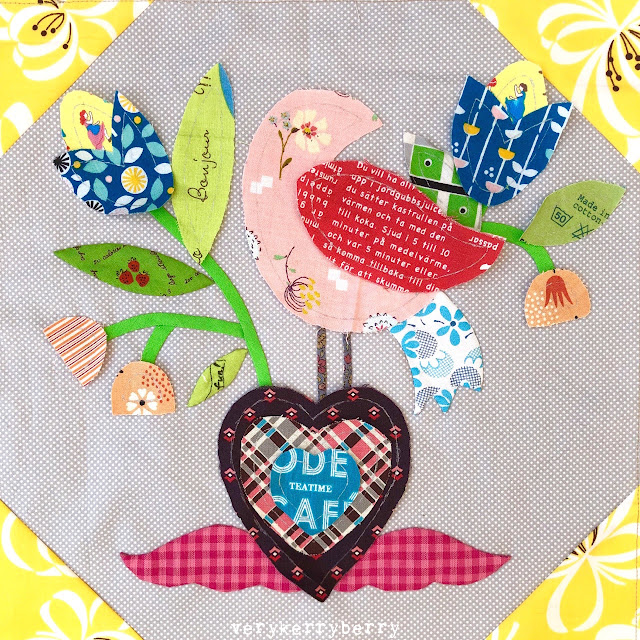 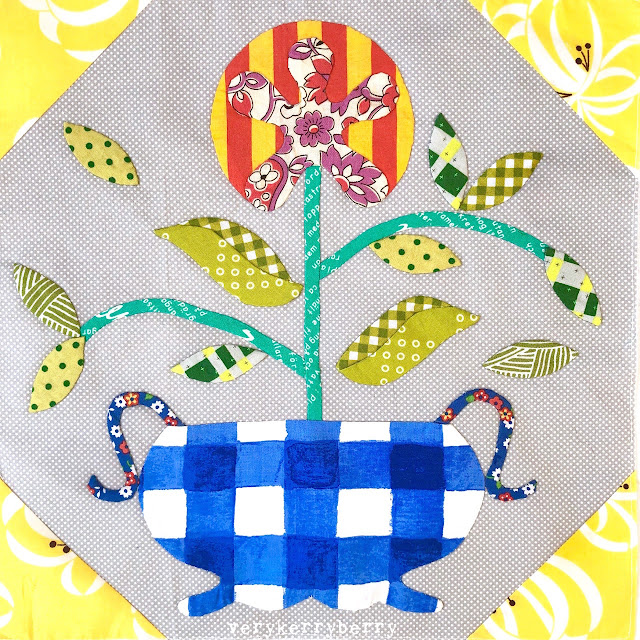 This block has been tweaked a little from Sarah's original design- the top flower was redrafted.  I love the double leaves on this one, and the vase handles which I find much more pleasurable to sew than I first thought, curves are so satisfying, inner angles and points less so.

I am steadily working my way through all the tutorials.  That's the beauty of Sarah's BOMs, the tutorials and videos remain even though she's moved on to another quilt.  My aim is to complete the quilt top and have it professionally quilted before the year is out.

Meanwhile, Happy Easter!  We are having beautiful weather in the UK and I've been getting outside walking Joni, planting Alpines into pots to prettify my courtyard and spending time with my family.   It doesn't get better than that...I'm feeling very lucky.
at 21:20 No comments:

I chanced upon a random local costume exhibition with a twist this weekend after seeing a friend's Instagram post.  In our local historic guild hall, there was a two-day exhibition of Norman Hartnell's dresses, sketches and related items to raise funds for SSAFA, the Soldiers', Sailors and Airmen's Families Association.  Norman Hartnell designer to Queen Elizabeth II and Princess Margaret.  He was also Godfather to Claire Williams, branch secretary for the Devon branch hence the local event.  She has a personal collection of dresses that he made for her, including her wedding and bridesmaids dresses, dresses she wore as a child with matching doll's frocks- all beautifully detailed with embroidery, original artwork with designs for the then Princess Elizabeth, needlework (beaded, gold work) from his couture house and evening dresses through the decades. There were about 15 dresses all wonderful to look at but difficult to photograph as the lighting wasn't great, but an enjoyable and unexpected local display for £5 entry.  In an upstairs room, there was an unexpected bonus extra of illustrations and a doll from a 1943 exhibition... 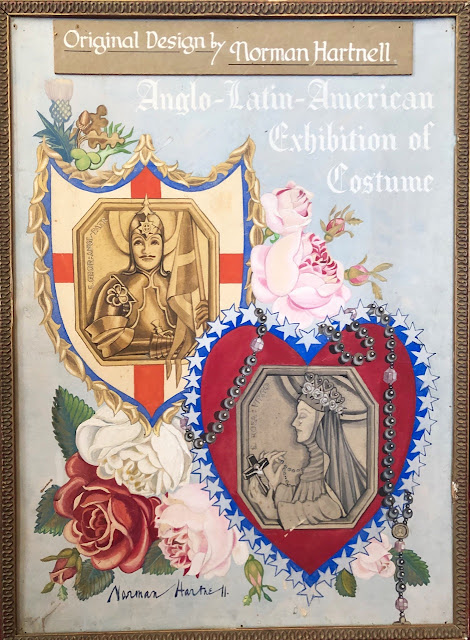 The original exhibition comprised of 20 dolls wearing international costumes, interpreted and designed by Hartnell, sewn at his London couture house with the spirit of make do and mend using the scraps from dresses.  It was sponsored by the Board of Trade with the aim of making connections between the London couture house and the Latin American Fashion Markets whilst also raising money for SSAFA.  The colour painted sketches have survived well.  Again, difficult to photograph but you can get a flavour of the designs from this Bolivian costume painting. 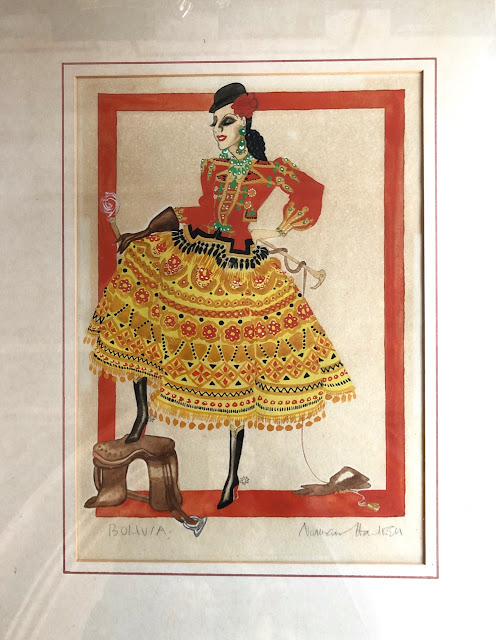 This is a Hartnell with the Bolivian doll.  You can see the level of detail in the clothes and accessories.  The dolls were modelled by Helen Barclay and the faces painted by Hartnell. 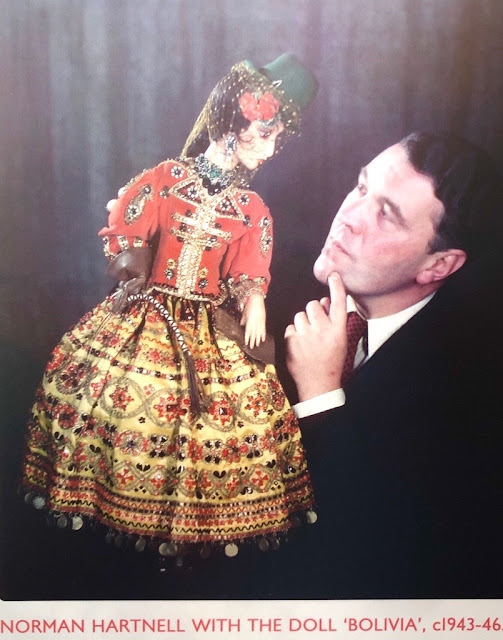 The most amazing exhibit was the original Bolivia doll.  I think she had only been recently discovered in storage and is now rather fragile and a little damaged but incredibly special to see.  I think she is also the only surviving doll. 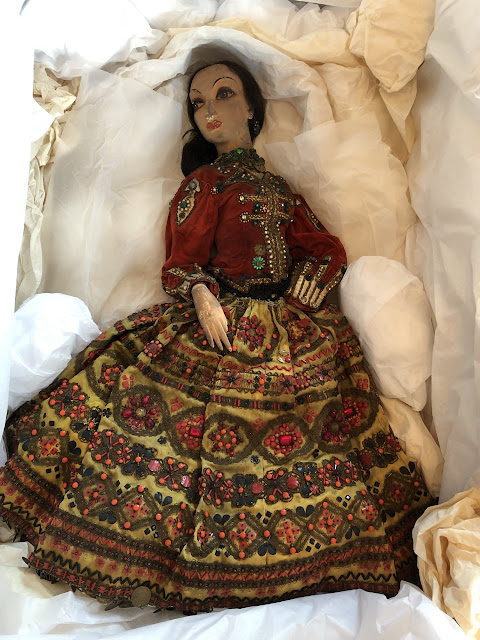 The exhibition ran from 1943-1946 and toured major cities in England and Scotland.  This image is from that time,  Queen Consort of King George VI with Norman Hartnell. 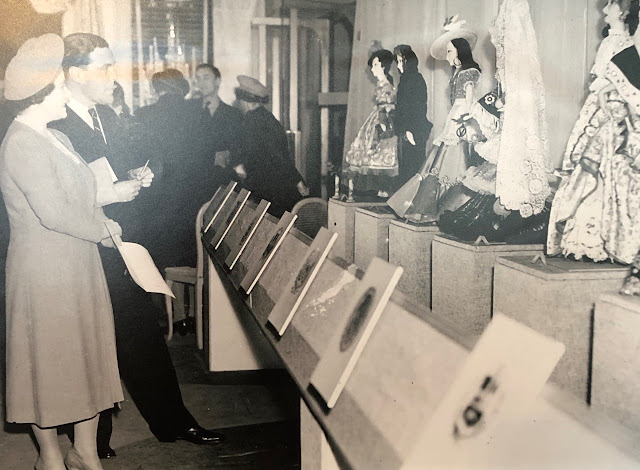 This is a local poster from when the exhibition came to Exeter.  The entry was free so the money raised was through donations.  It raised £10 000 for SSAFA in total which seems like a large amount for the time-  the final years of world war two and just after. 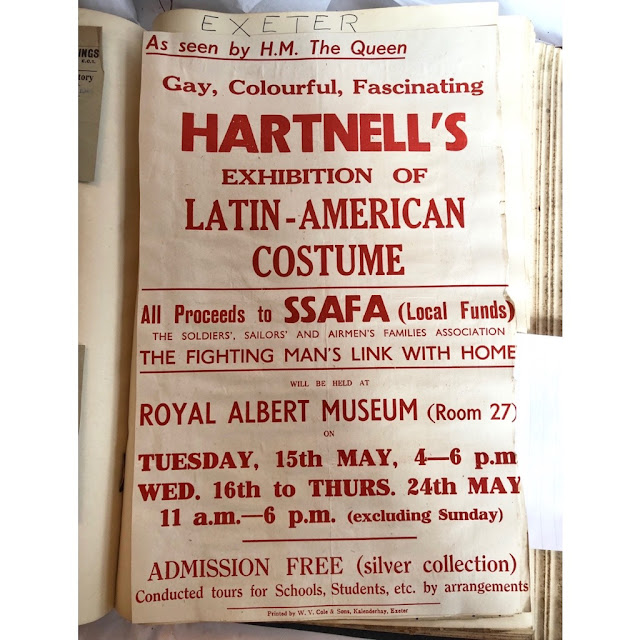 The other sketches were rather wonderful- this is Peru... 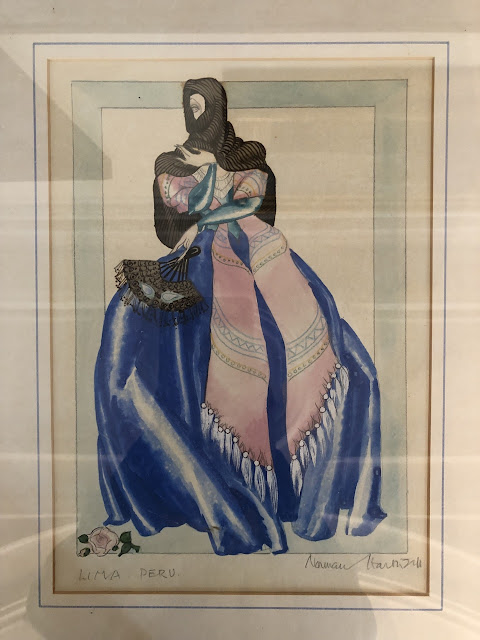 I was rather taken with this preparatory sketch for Mexico.  The face reminds me of the actress Joan Crawford, very popular at this time. 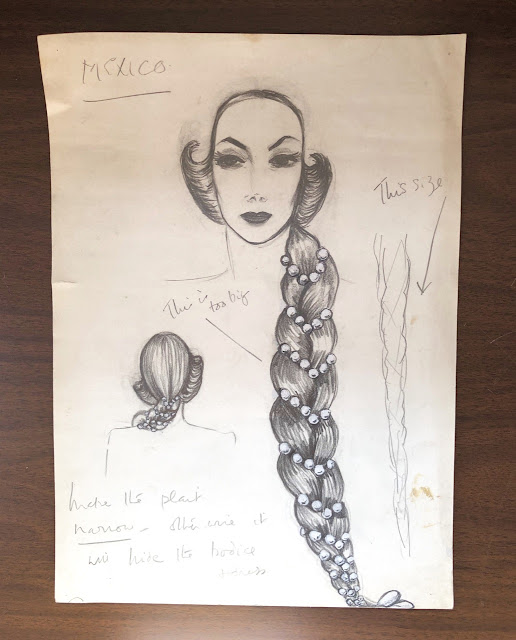 I'm not really a royal fan, but I do like costume and history and this was such a quirky episode of fashion and wartime, a hidden gem!
at 18:22 1 comment: