All You Need to Know About Pattern Trace/Swedish Paper + Discount Code!

I've been sent a roll of Patterntrace Swedish Tracing Paper to review.  It's actually something I've used for years when tracing clothing patterns!  I used to buy it from various obscure online sellers who knew it's secret powers and I think it was shipped from Canada then.  At times, supplies were hard to find and deliveries could be delayed for months.  In 2014, Clare devised a business idea having watched Sewing Bee and heard about the wonders of Swedish Paper and managed to find a UK manufacturer, she's been selling it ever since.  So, I thought I'd share with you what it is and why I like to use it, plus there's a discount code coming up... 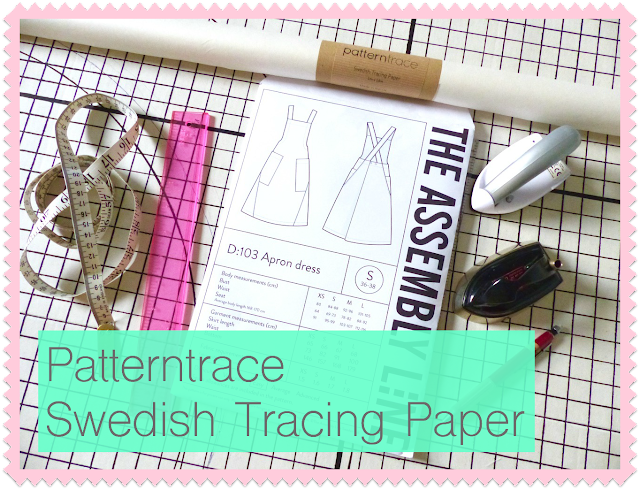 Patterntrace is a lightweight translucent tracing paper that is ideal for tracing garment patterns.   Swedish paper doesn't really feel like paper- it's much softer and more forgiving to handle, it even has a little drape to it!  Instead, it feels similar to a very fine, nonwoven interfacing but much smoother and although it is thin, it's got some resistance to tearing.  I've traced many of my favourite tried-and-tested patterns with it and they have stood the test of time.  It has a wide width at 1m so there's no need to tape sheets of paper together and I save the offcuts for tracing smaller pattern pieces like pockets and facings.  I like to use a soft pencil when I'm tracing, preferably a Sewline Ceramic pencil as it glides over the surface and can also be erased if I trace the wrong line or notch!  You can see my other tracing tools- a quilt ruler (whichever I grab first), and pattern weights (the mini irons). 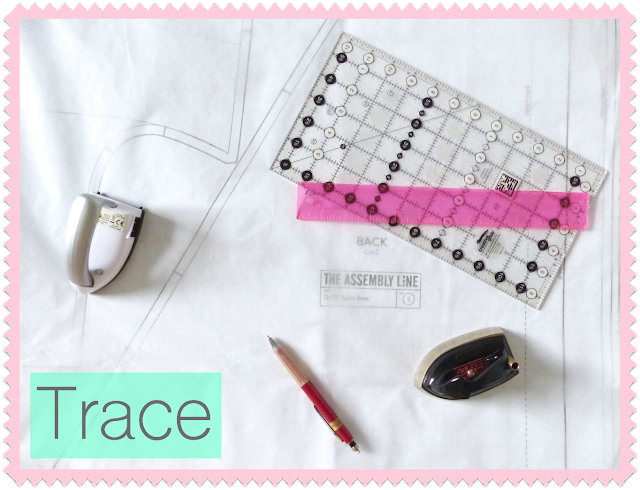 So why trace in the first place?  I don't trace every pattern, but when I make a garment with bodice pieces, I know that usually needs several alterations and by tracing, I'll retain the original pattern as a reference if I mess anything up!  I also use it if I'm making a garment in more than one size, e.g. one for me and one for my daughter.  At other times, I trace particular elements, especially sleeves so I can have a short, mid-length and long variations.   I've tried greaseproof paper, dot and cross paper and brown paper and they can be awkward to handle as well, hard to see through, as well as creasing and folding when I don't want them too and generally irritate me when I'm using them in large pieces.  Because Patterntrace is soft, the pattern pieces can be pinned and draped on the body so I can get an early idea on fit.  The softness is also more forgiving when working in a small space as it will gently crumple rather than tear and easily flattens.  I sometimes iron swedish paper pattern pieces I've used before that have been stuffed in ziploc folders and the storage creases come out easily.  It takes up less room up than standard paper when the pattern pieces are folded up. 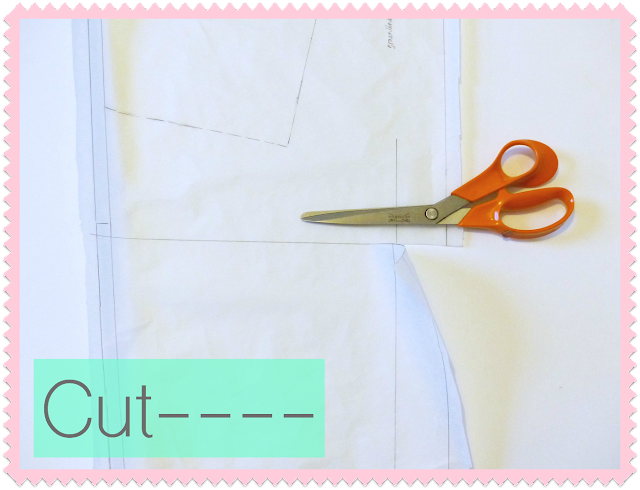 I also trace when I want to experiment with an alteration.  In the example below, I'm tracing The Assembly Line Apron dress which I'm going to lengthen by 2 inches using a slash and spread method.  I want to keep the original pattern intact so I can still make a shorter summer version.  I trace the front dress and back skirt and add a horizontal line to each, the same distance up from the hem.  This is then cut and pulled apart so there's a 2" parallel back between the two pieces.  This is a rare occasion when I'm quite happy to use fabric scissors or paper scissors as I don't find Swedish Paper blunts the blades, it cuts easily too!  I use an invisible tape (like Scotch Magic Tape) when I'm altering pattern pieces.  It lies very flat and it can be drawn on (although avoid the iron!). 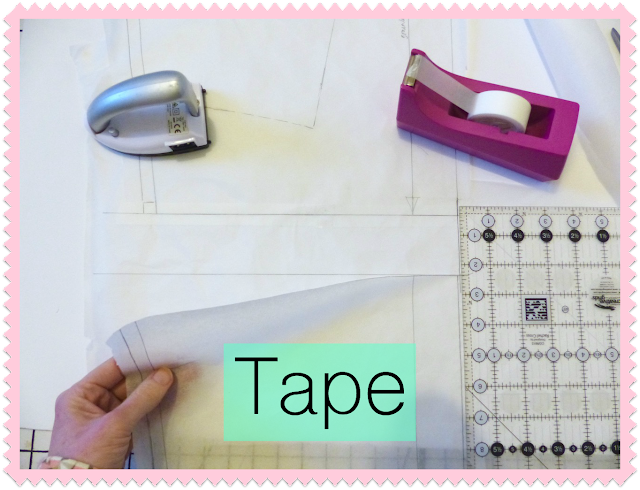 Ultimately for me, Patterntrace makes tracing a more pleasurable experience.  The resulting pattern pieces are easier to handle, I can try the pattern pieces on and it takes pins much more easily than standard paper - what's not to like?
You can get a 10% 0ff all orders including Patterntrace with the code Verykerry
Pattern Trace is available as a 10m roll (1m width), or you can try a mini sample piece.
Check my Instagram @verykerryberry for a Patterntrace giveaway...
at 09:28 No comments:

I wanted to get my monthly sponsor post in early in December so there was still time to order and receive items for Christmas. I've chosen a mix of quick gifts you might want to make,  quilting and dressmaking suggestions that you might like as a gift, or make for yourself (or others), plus some fabric that you just might need to have! 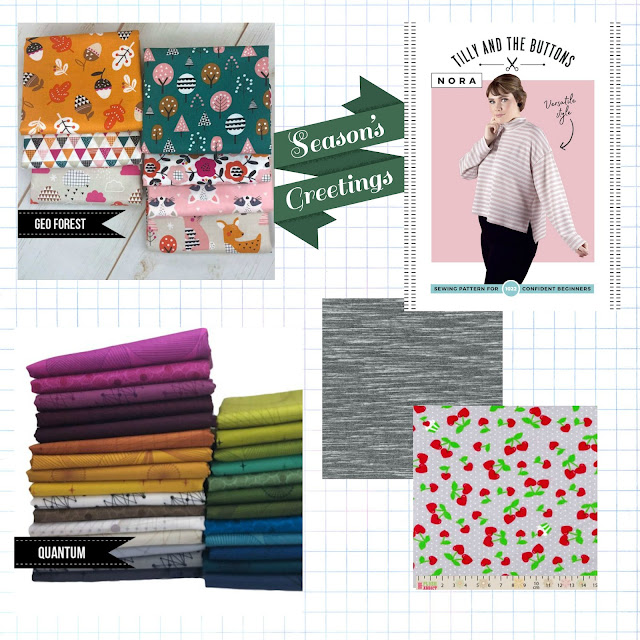 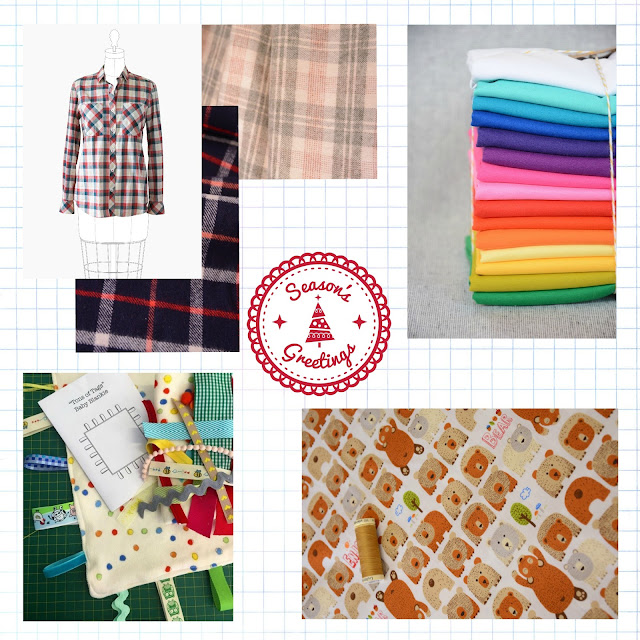 As promised, here's my second The Assembly Line make: the V-neck Dress.  I was
attracted to this style by the narrowness of the V-neck and the back neck collar, plus I knew I'd enjoy working through the collar construction. I used some Robert Kaufmann medium weight Chambray Dobbies Hash that I've had for three years waiting for the right project and it turned out to be a winning combination! 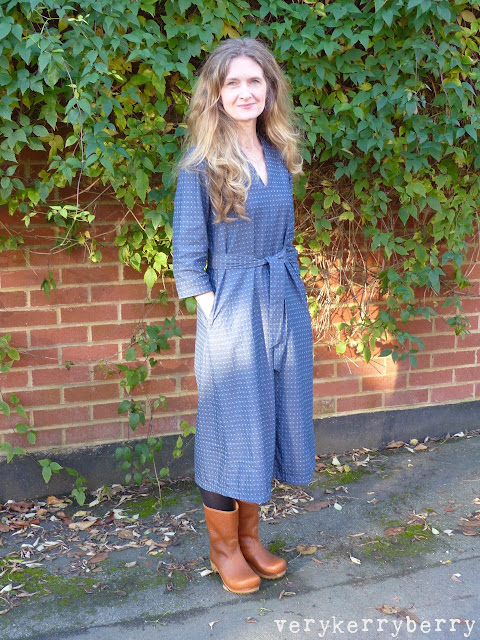 The standard seam allowance on Assembly line patterns is 1cm (3/8") so I made a rough toile of the top part of the dress to test the depth of the V and fit around the sleeves.  I went for quite a close fit and ended up raising the V point by around 1/2" which also brings the neckline in slightly and added a rounded back/shoulder alteration which is standard for me.  Fitting for this style is all about the neck, shoulders and bust; getting those areas to fit well avoids the sack-like potential that can easily happen on a dress with optional waist definition. 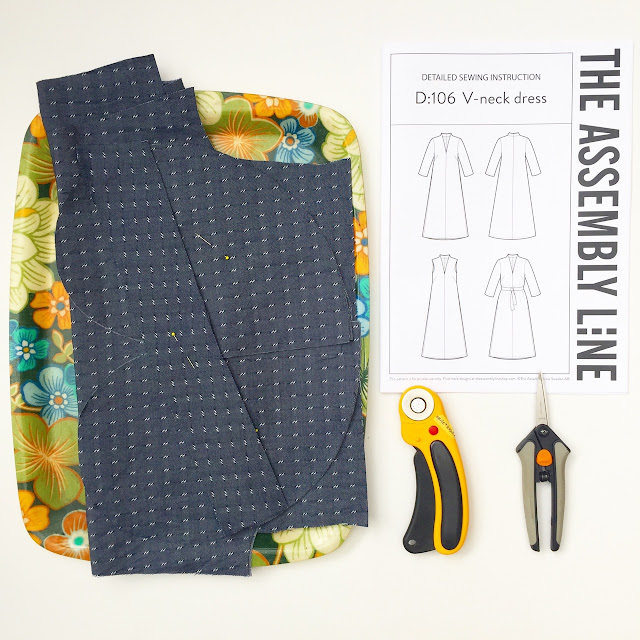 My other alterations were to move the end of the bust dart upwards by 1/2" and redraw the dart,  and I also extended the dress hem by a couple of inches. Otherwise, I cut the pattern in size XS and the combination of the fabric and instructions meant the construction was a joy.  I love it when details like exactly when to overlock on a trickier section are included as it makes for such a neat finish. 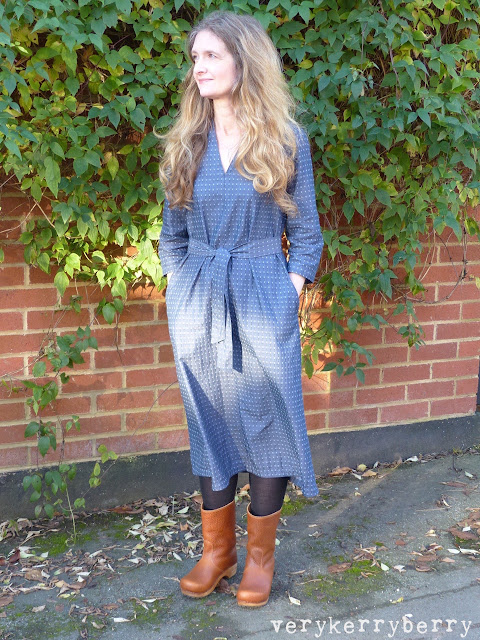 The tie belt has an interfaced centre section so there's a little extra body against your back and I think it helps it to stay in place too. 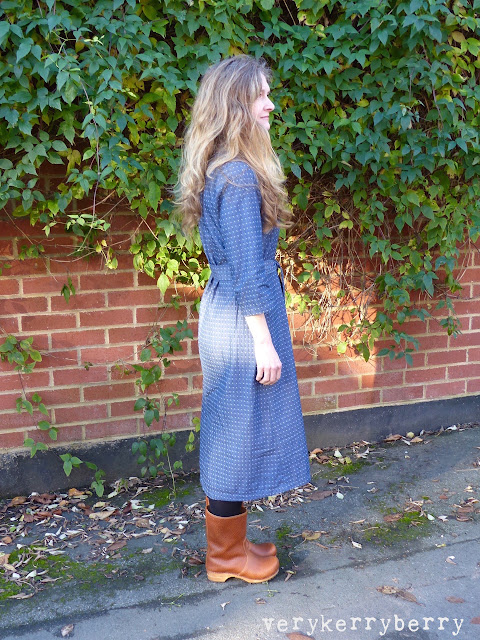 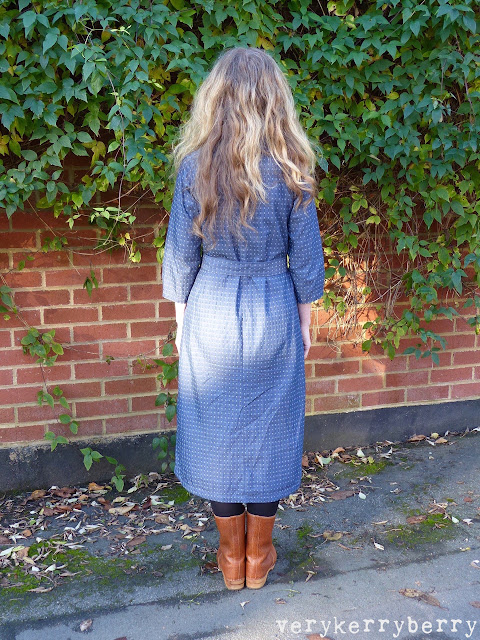 If I'm working at home, I take the belt off.  It's a relaxed fit but not voluminous.  I'm really happy with it!  It's quite a quick make so I'm planning my next version,  I've got some lovely Intermix chambray from Plush Addict which is a soft woven in a medium weight and I'd like to try the sleeves at full length and add a little extra length in the lower skirt.  The boots are Sanita Puk, I sold a few bits and pieces and bought myself these and I love them!  There's nothing like the sound of clog boots. 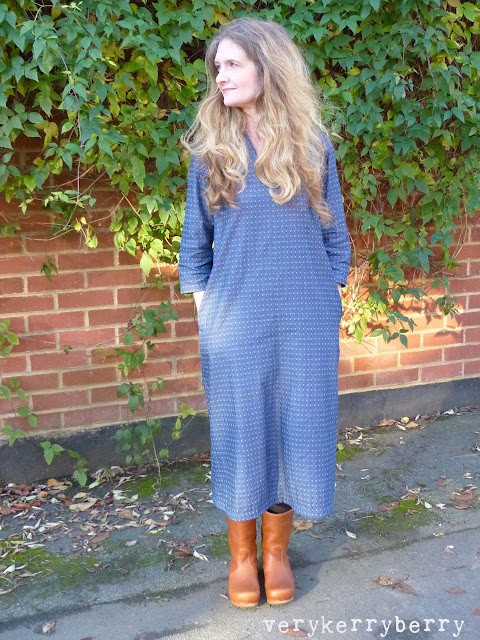 It's such an easy elegant style to wear, another win from The Assembly Line.  The Apron Dress is next...