Thoughts on Periscope and the Sewing World

Periscope is the newest form of social media to be taken up by sewing bloggers and Instagrammers.  It's an App, owned by Twitter and available for free on IOS and Android.  Best described as mobile  live streaming video with a social element, it has great potential for sewers on social media, especially fabric shops or designers as it can provide an interactive live experience for you and your customers.  I've been doing some Scopes for the Farmer's Wife 1930s quilt along, I'm www.periscope.tv/@verykb, and I use it to introduce the blocks each Monday and discuss any issues or tips that come up each week.    I am still very new to the Periscope experience so I am talking from the scantiest of experience, this is very much my first impressions of a new kid on the social media block. 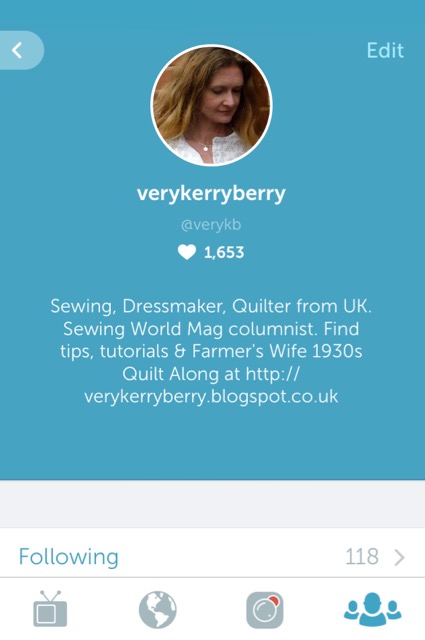 Basic Stuff to Know
This blog post explains how to get started on Periscope as a broadcaster or viewing other's Periscopes.   And this one tells you what Persicope is and gives you further ideas on getting started.   I would recommend watching other people on Periscope before you broadcast yourself.  It will give you an idea of what's out there and what you want to add to that.  I'd also recommend following other sewing people- use sewing terms to search for them- quilt, dressmaking, sewing- all very straightforward. 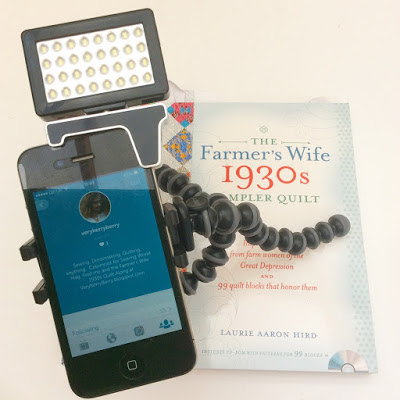 When you write your biog for Periscope it helps to include these terms too.  I also follow a really helpful Periscope guru, Alex Pettitt and I've found his broadcasts are incredibly useful, especially for newbies. He also has a website with Periscope related content. 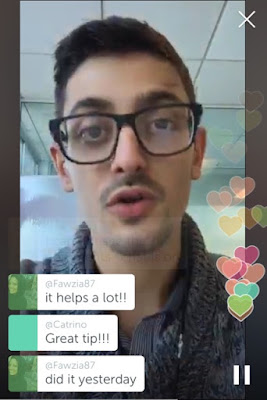 This is a screen grab from one of his broadcasts.  You can see the comments which is the social element on the left and the multiple heart on the right.


What's the impact for the sewing world?

Equipment wise, based on some other blogger recommendations, I bought a Gorilla grip to hold my phone and an LED light which is very bright indeed and useful for taking pics in the winter months as well as broadcasting. 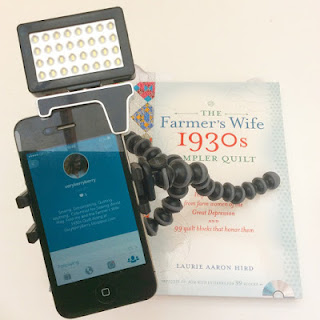 I think a lot of people think initially that Periscope is going to be great for tutorials but as a live medium where you are both broadcaster and camera operator, it's pretty hard to do anything beyond the simplest tutorial.  It end to stick to chat about topics related to the Farmer's Wife blocks- it might be about using specific equipment or why templates are particularly useful for a block.  It's great for talking about fabric- it offers a visual medium where you can react and respond to comments and requests live.  I've seen shop owners like Lauren of Guthire & Ghani do this brilliantly-
find her at https://www.periscope.tv/@GuthrieGhani

Brenda of Pink Castle Fabrics has used it to show new fabric lines and sewing machines.  She tends to present and her partner Jason films and relays comments and questions-
find them at https://www.periscope.tv/@justabitfrayed

For garment sewers, pattern and fabric designers, shop owners, Periscope is a great opportunity to show your products live.  You can see a moving representation of fabric or a garment, get an idea of drape, fabric density, ask a question about what you are seeing and get your response.  I know that the idea of appearing live in front of a camera is terrifying.  I am not a terribly outgoing person and I can still remember the enormous and overwhelming feeling of fear as I stood in front of a class of eleven year olds when I started my teacher training and Periscope reminds me of that adrenaline filled experience, but as with teaching, the more you do it the easier it gets and sometimes you just need to take a deep breath and do it.  Before you hit the broadcast button think about:


I do get the feeling that sewers like to observe more than they like to interact- I know that's the case for me, I enjoy being the spectator and the occasional commentator.   I do know that sewers enjoy meeting each other and Periscope can feel like you are doing just that and it makes the world a smaller place. Any thoughts?  Please share below.

Email ThisBlogThis!Share to TwitterShare to FacebookShare to Pinterest
Labels: periscope