I was offered some needles to review and straightaway they caught my eye.  Certain Stitch Needles by Pony have been designed to make consistent hand stitching easier.  Each needle has a colour band near the tip of the needle, it can be felt on the needle and also as you push the needle into the fabric.  I tried out Short Darners, Crewels and Betweens but I concentrated on the Short Darners. 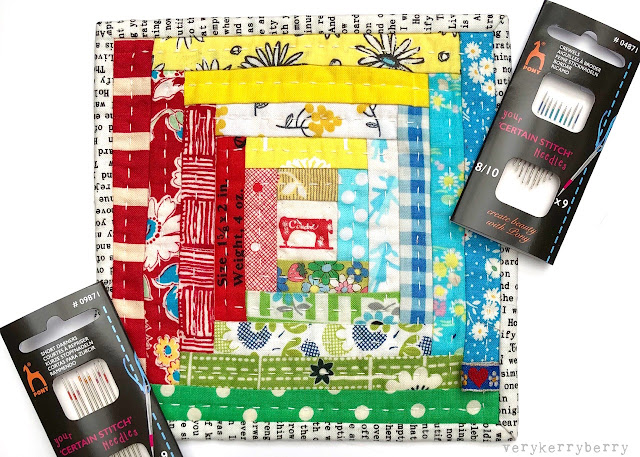 Each packet of needles contains a mix of sizes and the colour bands vary along with the sizes so you can choose different widths and lengths of needles with different band lengths and colours to create your stitches.  They are a standard cost (currently £1.99 at Wool Warehouse). 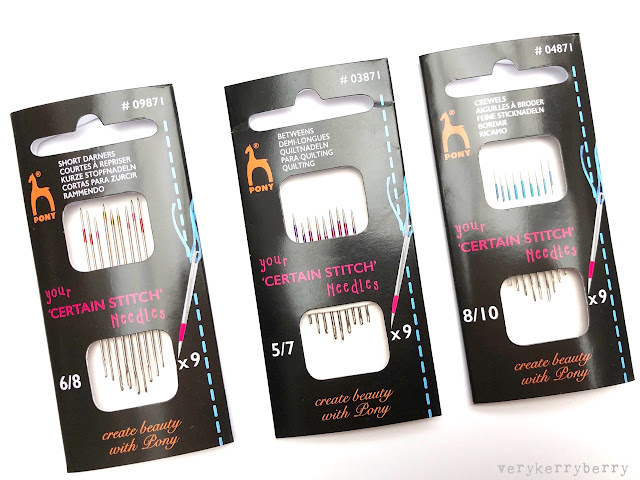 I used Short Darners with Aurifil 12 Wt for some bigger stitch details on this coaster.  I sewed through two layers; a quilt block and wadding.  I put some guideline creases in with a Hera marker and quilt ruler and got straight to work trying the needle out.  To work out the stitch length I lay the band of the needle next to the thread end and visually noted a point to aim the needle tip.  Once the needle is in and the tip is ready to come out from underneath, the band comes into play and as I rocked the needle in and out of the layers and watched the band travel through, I did make consistent stitches and sewed faster than I usually would.  The distance from the end of the band to the tip of the needle measured twice the length of the band and I found I could complete several stitches at a time using these visual guides.  You can see a video of these needles at work, plus a voice-over and captions, in my Instagram @verykerryberry highlights 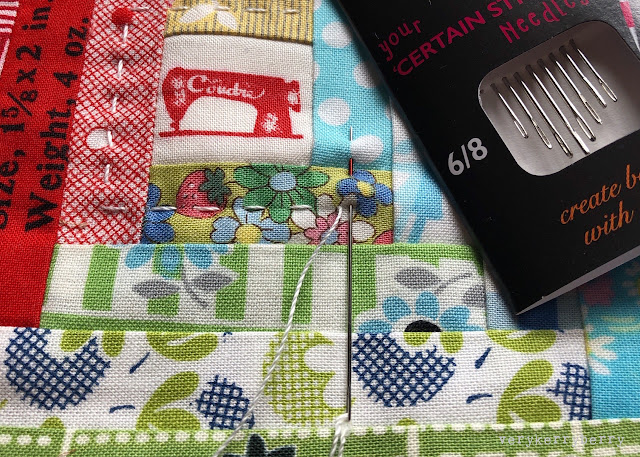 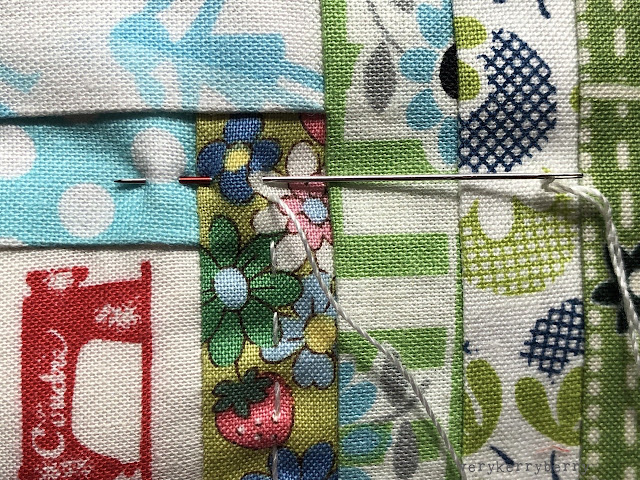 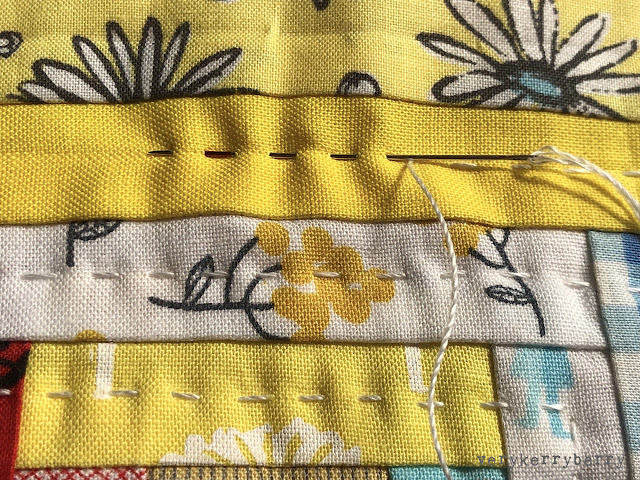 It's a clever idea and I would certainly use the Short Darners on small projects where I want to add big stitches as a detail.  These needles would struggle on layers of fabric, I think they would bend out of shape and be hard to push through seam bulk, but they worked fine without a thimble on the fabric/wadding layers.  I did try the Crewel needles which are shorter and thinner, on the edge of the batting and I did find that they are very useful for establishing a consistent chain stitch (also detached chain stitch)  I tried blanket stitch but I wasn't sure how much they were helping.  It needs more experimentation! 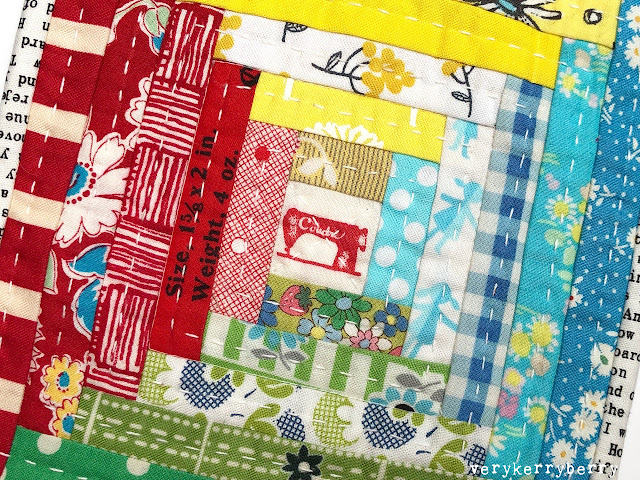 They are an interesting product.  Like any needles, personal preference- size, length, thickness etc. varies with each sewer.  I don't know how resilient the coloured band would be over time either as I've only tested the needles over one afternoon.  I would guess they would wear with use and need replacing. When I posted my video review, one commenter, @sarahtextileart, suggested they could work for Sashiko too which I thought was an interesting idea. Lots of Zakka style projects have Sashiko style stitches along with other simple embroidery details and I think that is what I will use these for.  I did try the Betweens for hand quilting... 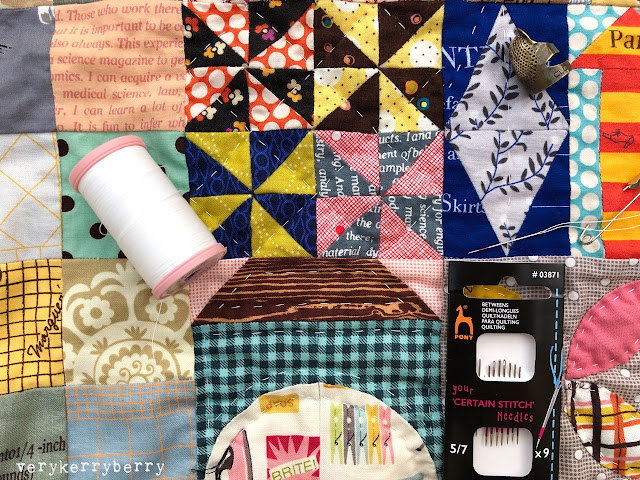 This is My Small World Quilt (yes from the QAL four years ago!).  It is a mix of machine quilting for the sky and hand quilting on the buildings and is not yet finished.  I used the longest Between needle on the pinwheels and the roof and curve in the pic above.  These are a lot shorter and I think the distance from the band to the tip is the same as the band length.  I struggle with a rocking motion through three or more layers as it tends to make my wrists and fingers hurt, hence why this remains unfinished.  These needles can take more tension and weight, as you would expect with quilting and I did manage those stitches in quite a short time- still makes my hands hurt though!  I sewed one or two stitches at a time.  The coloured band does make for one less thing to think about so I think I will try to pick this up for short times and use these needles as an incentive to get it finished.   I'm using Coats & Clark Hand Quilting Cotton thread.  It's quite thick with a special coating, it never snaps when I'm tugging knots through and I like the appearance, white seems to go with everything!
at 01:00