This project has been a while in the making. I bought the dark denim from Plush Addict at least six months ago. It's quite heavy, like a sturdy pair of jeans and it's heavily dyed so I prewashed it a couple of times and it still made my fingers blue when working with it. It stayed in my stash until I gradually formed a plan with a vintage pinafore dress pattern, an embroidery book and a Cotton + Chalk Sunday set pattern... 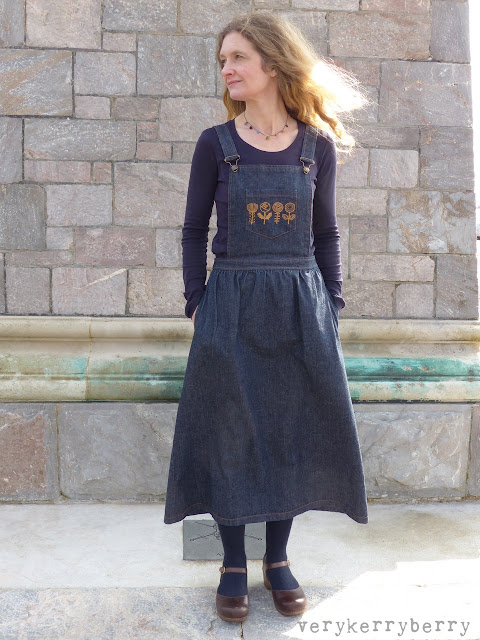 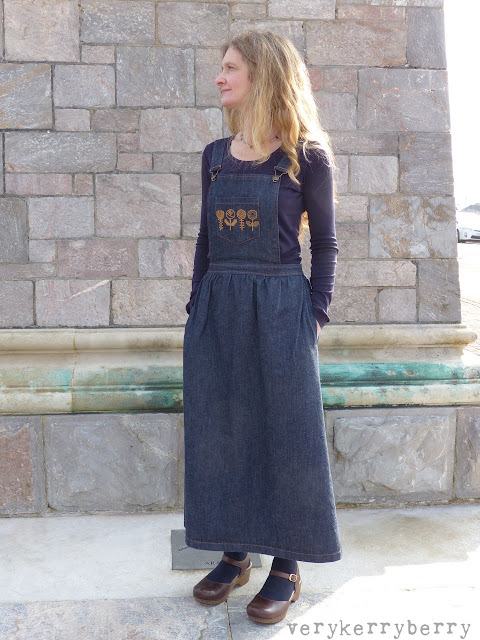 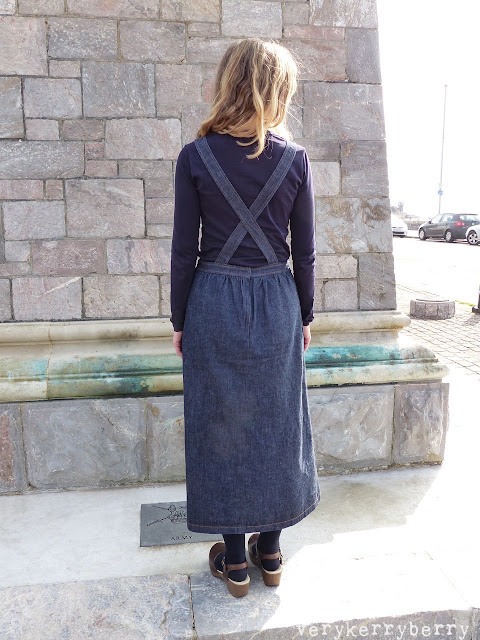 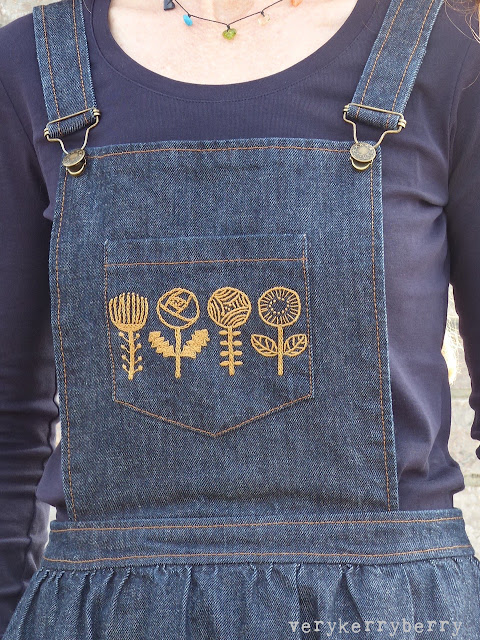 I started with the embroidery and a large chunk of denim that could be trimmed down for a pocket.  The pattern is from Zakka Embroidery by Yumiko Higuchi. It is a genuinely inspiring book, there's such incredible beauty and simplicity in her designs. I traced the outlines on to Sticky Fabric Solvy which I've mentioned before.  You can see the process from stitching to dissolving to the finished design. 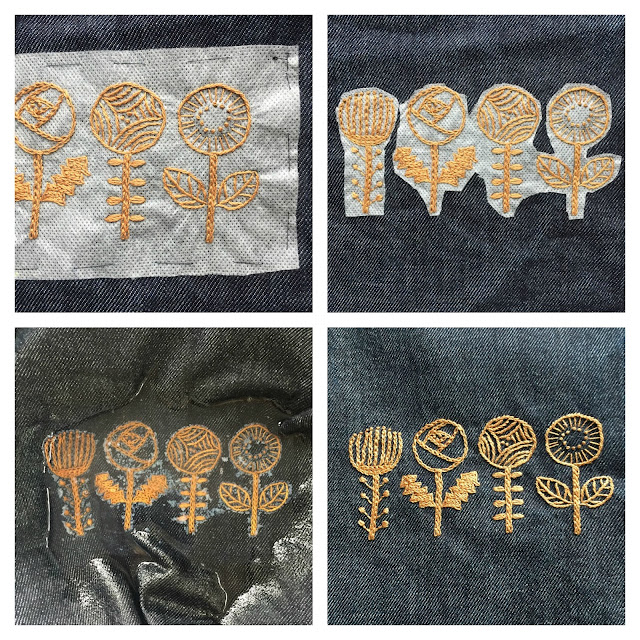 The bib, straps, waistband and pockets were cut from the Cotton+Chalk Sunday Set pattern. This was a freebie with Simply Sewing magazine and given to me by a friend. I made a size S and it is generously sized. I did make a quick waistband before cutting the other pieces out but it still came out larger than I planned so I tightened it a little with an extra bit of overlap on the waistband clip. The skirt was from a Woman's Realm vintage pattern. It's a long triangle shaped A line with a few gathers at the waist and I chose the longer view on the right which without the frill is a long midi. I did make a trial of the bodice of this pattern originally but it was way off in size with lots of fullness in the front. The Cotton+Chalk pattern is a circle skirt with gathers which is a bit full a bulky for the look I wanted. 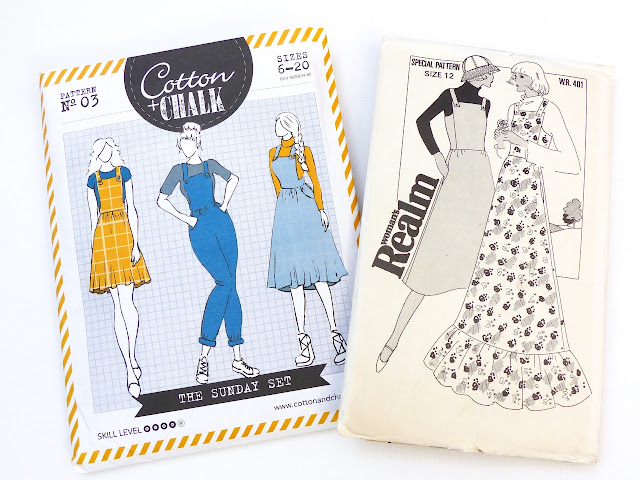 The side pockets were sewn using an 'Out of sight' feature in the March issue of Threads magazine. It was one of those technique articles that they do so well and it created the best finish on the inside as well as the out. Threads is one of the few magazines where I cut and keep the features.  The top stitching was done using Gutermann's top stitching thread from a denim thread box. I used theGutermann's standard sew-all thread shade 339 in the bobbin and the top stitching thread on top with a Superior Threads 100 Top stitching needle.  I've tried various ways of doing this and a large top stitching needle makes a big difference to keeping the thicker thread tension even. 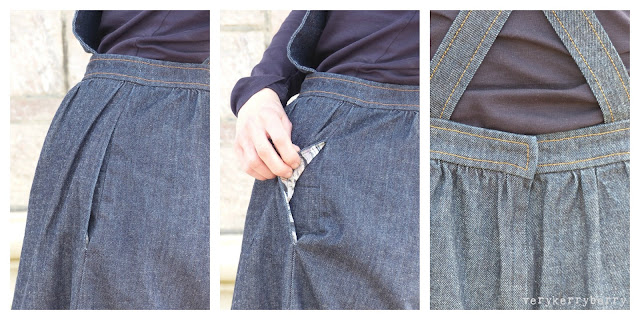 My daughter described this look as 'Scandi Kindergarten teacher' and said I looked like I was ready to whip up a stack of flower crowns out of twigs and wild flowers.  She knows me well.  Thanks to her for taking these pics on one of our regular beach walking trips.  It was a genuinely slow stitch project with a fast ending and it has already been much worn in the last week. 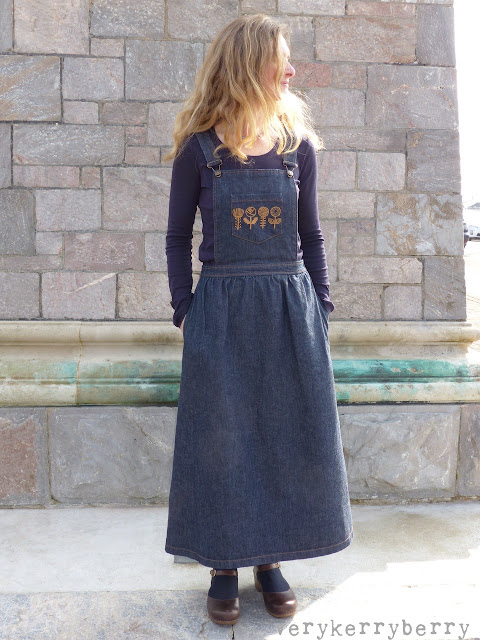