I've just come out of one of those situations in life where everything goes into slow motion and you watch yourself and those around you go into free fall. My husband suddenly ended up in hospital for a prolonged period and what seemed straightforward escalated into something else.  The good news is, we all came out the other side, but the last few weeks have been chaotic and challenging. There was a lot of time to kill so in between staring out of windows, I sewed up the folk bird pattern from Nancy Nicholson's Modern Folk Embroidery book. 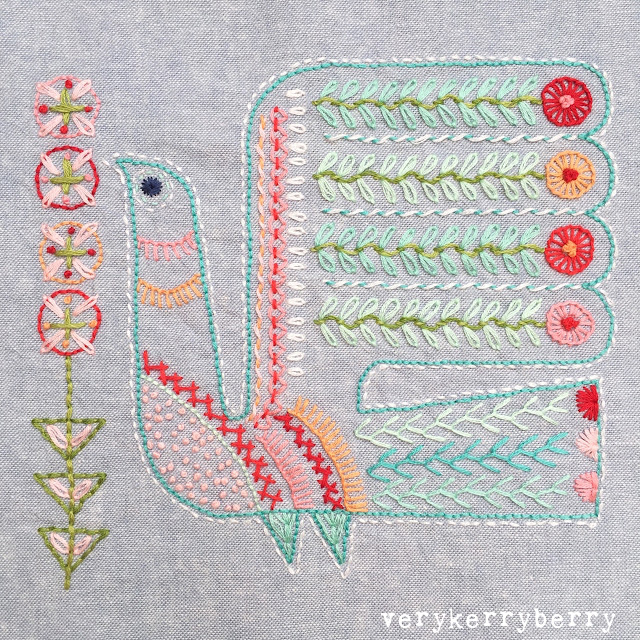 The original pattern is a felt appliqué design with embroidery on top but I needed something simpler and portable so I used Sulky Sticky Fabric Solvy which I ended up loving and hating but I've now decide I would use it again. The pluses are that it's printable: inkjet or laser printer, and the stabiliser sticks on top of the base fabric - I used Robert Kaufman yarn dyed Essex linen in Chambray. The downside is I could feel the stickiness as I gripped the embroidery hoop - not good for hot hands!  I worked around this, outlining the main design and trimming back the solvy as far as I could and after initially finding it rather tough to sew through, I found it did a great job as a stabiliser as well as being an easy way to transfer a detailed image. I tested scraps of it before I started sewing to check it did dissolve in water and it does, with a little soaking,  in a rather magical fashion. 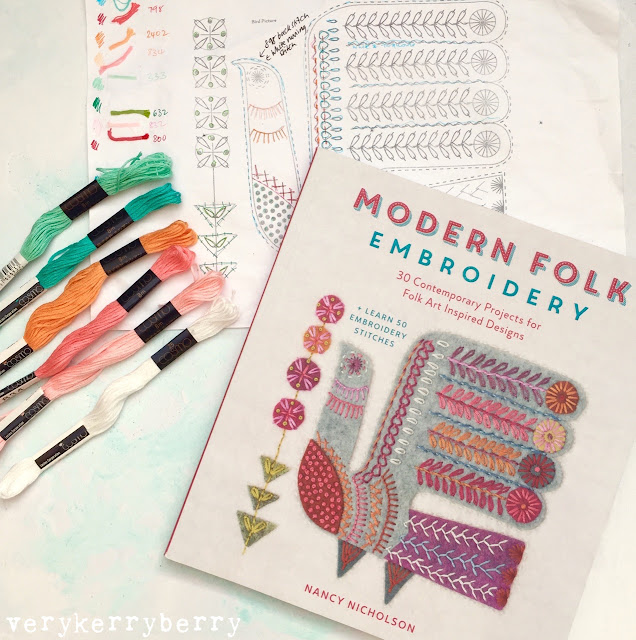 There's probably about twenty hours of embroidery in the finished piece.  I haven't decided what I'm going to do with it yet.  Probably a small frame, maybe a fabric border. The Cosmo/Lecien threads were from a Fat Quarter Shop Bonnie and Camille colour selection from a one-off Sew Subscription box I bought a few months back and I used the Primitive Embroidery act needles that came in the same package and I really like sewing with them.  I tended to use three threads of the six-strand floss at a time which worked well with the long eyed needles.  Embroidery like this with a printed design is the perfect distraction, it needed enough engagement for me to concentrate but not so much that I messed up and helped to pass what seemed like endless stretches of time. I'm currently getting everything back on track at home and feeling very grateful that we're all here together, you never know what's round the corner.
SaveSave
at 17:03